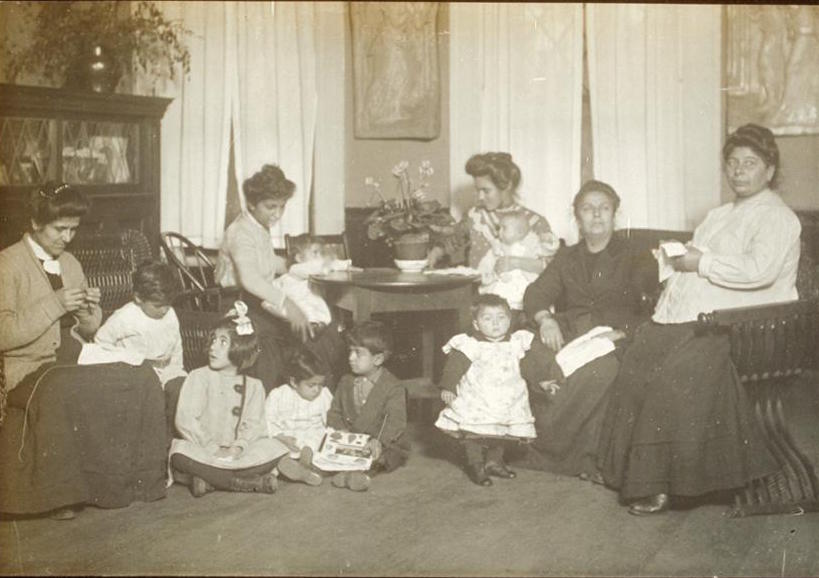 It is interesting to compare the Syrian colonies of New York City and Boston. Both cities were major ports in the nineteenth century and, along with Providence and Philadelphia, were east coast entry points for Syrians. Boston’s Syrian colony was 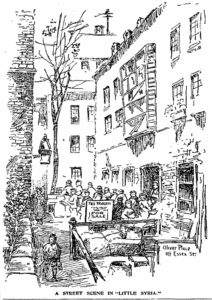 reputedly second only to New York’s in size. The Boston Syrians lived in a tightly circumscribed South Cove neighborhood whose hub was Oliver Place, a street which became synonymous with the colony. Similarly the New York colony lived primarily on Washington Street on the lower west side of Manhattan and was associated with it. Both neighborhoods were made up of mid-century single family homes that had been converted to crowded, unhealthy tenements. Both were built on landfill, which meant that the tenements were not only crowded and dirty, but damp and often flooded. The earliest members of both colonies were exclusively Christian (unlike some of the Syrian settlements further west), and these cities were home to the first Syrian churches in America. Like most early Syrian communities, the majority of new immigrants—both men and women—were peddlers.

But the similarities end there.

The earliest arrivals and more prosperous members of the colony began to move to the surrounding towns around 1905; some were able to buy houses. The Boston colony was thus continually replenished and enlarged by new immigrants, many of whom skipped the peddling phase and went to work directly in the mills. Nearby mill towns like Lawrence, Worcester and Fall River all had large populations of Syrians, the majority of whom were employed as unskilled laborers. Lawrence was the home of the first Arabic newspaper founded in Massachusetts—al Wafa—in 1907, and Syrians in Lawrence participated in the famous Bread and Roses strike of 1912 (a 17-year old Syrian boy, John Ramey, who grew up in Boston, was one of three strikers killed).

In short, the Boston colony, notwithstanding its position as second in size to New York’s, was a pale reflection of it. There were bright spots, however. Denison House, one of the earliest college settlement houses, was founded in the neighborhood in 1892. It provided training, education and activities for Syrian (and many other) immigrants, who otherwise might have languished in their tenements. The young Kahlil Gibran frequented Denison House and was introduced to his first mentors through it. Much of his early art and writing were produced in Boston, and although he moved to New York in 1912, he continued to have strong connections to Boston intellectual circles, both American and Syrian. The Boston colony, helped along by Denison House, set him on his path, as it did so many others.

–This is first in a series of blogs about the Syrian colonies in the U.S. in the nineteenth and early twentieth centuries.