The following post is an excerpt from my about-to-appear book, Strangers in the West, about the travails of the earliest Syrian immigrants who arrived in New York harbor in the 1880s. 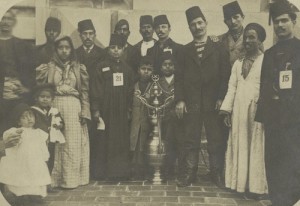 Although the “First Syrian Immigrant Family” arrived in New York in 1878, Syrian immigration did not really begin until 1880, picking up steam in mid-decade and becoming a flood in the early 1890s. In those early years, Americans regarded the new Syrian arrivals with a mixture of fascination and horror. The newspapers played an important role in stirring up American fear and loathing of these newcomers, while adoring (and exploiting) their exoticism. Early newspaper stories frequently described them as indigent beggars who threatened to become a burden on American society. The immigration authorities were constantly threatening to send them back and often did so.

Under the innocuous heading of “Political Jottings,” a squib printed in the Boston Journal in 1888 encapsulates this attitude of fear and loathing: “Last Sunday thirty Syrian Arabs were landed at Castle Garden [the New York immigration intake center before Ellis Island]. This makes about 3,000 of these people who have thus far come in. Most of them are devoted to one of two industries—thieving and begging. It is time the bars were put up.”

And the bars were put up. The Ford Committee of 1889 proposed to Congress that undesirables be turned back. An undesirable was defined as anyone who “is an idiot, insane, a pauper, or liable to become a public charge, or who has been legally convicted of a felony, other infamous crime, or misdemeanor involving moral turpitude, or who is a polygamist, anarchist or socialist, or who is afflicted with any loathsome disease, or who has entered into contract, express or implied, oral or written, to perform labor or service…or whose passage is paid on a promise to labor.” These restrictions were used to deny entry to those who failed any one of these tests.

An unnamed source at the Barge Office described a vast conspiracy involving Syrian merchants on Washington Street and the immigrants coming from the East. According to him, the New York merchants had representatives in Syria arranging passage for would-be émigrés, and getting money from them on the installment plan. Contradicting himself, the source stated, “We are convinced that some of the Syrians are sent for and their passage money paid by the merchants who employ them.” Which was it? Did the immigrant pay or the merchant? When they reached America, according to another reporter, a woman often obtained “an immigration husband” and a man “an immigration wife,” believing that this would allow them to stay. A story titled “Four Husbands Failed to Pass” described the attempts by a Syrian woman and her fifteen-year-old daughter to present four different men as husband and father. None passed muster, even after she presented a marriage certificate for the fourth one; it seems that the certificate had other names on it and had been used before. She and the girl were detained at the Barge Office and apparently sent back.

Until 1890, immigrants were processed at Castle Garden, then for one and a half years at the Barge Office at the southeastern end of Battery Park, and then finally, from 1892, at Ellis Island. The “processing” assessed the immigrants based on the criteria listed above. If one can believe the newspaper reports, these restrictive laws were used to reject a significant number of the Syrian arrivals, and the Syrians in America saw this as a huge problem. Naoum Mokarzel, in one of his earliest editorials in his newspaper Al Hoda (The Guidance), urged Syrian newspapers to stop encouraging emigration, as the immigrants would likely be turned back on arrival. A poignant article in the New York Sun called the immigration officials who decided on the immigrants’ fate “understudies to St. Peter,” who must have had trouble sleeping at night. The article described the pen in which the debarred were held while they awaited their ship back; they were kept in ignorance of their fate so they would not panic or revolt. They must have known they were being sent back, however, since they watched other immigrants leave freely. When they arrived at the pier to board their return ship, the reporter continued, there was “swearing, and pleading, and lamentation in Yiddish, Polish, Italian, Syrian…there is wild sobbing in the international code of distress. There is resistance, sometimes even downright rebellion.”

Syrians were barred entry for all of these reasons but the most commonly used was their supposed poverty and the likelihood of their becoming a public charge.

To be continued next week….