Orientalism and the Early Syrians

In my forthcoming book about the nineteenth-century Syrian colony of New York City (Strangers in the West), I purposely have not focused on Americans’ orientalist attitudes toward Syrians. Reporters regularly described their exotic dress and customs and wrote condescendingly about them (employing faux biblical language because of Syrians’ supposed connection to the Holy Land and referring to them as “swarthy,” “tricky,” or prone to violence), but the condescension was applied with a relatively gentle hand. The articles were often amusing and sometimes even admiring, both of which could be seen as simply another side of condescension, but they did not and do not offend.

I think there were several reasons for this politesse. Probably most important, the Syrian colony was small and easily ignored; the colonists didn’t compete for jobs with their Irish neighbors, and other New Yorkers were largely unaware of the immigrants’ existence. Second, Americans considered Syrians “white” and continued to do so until the early twentieth century, when nativist fever made every non-European a villain (not all that different from today). Third, all the members of the colony were Christians. Although most of them were members of “exotic” eastern sects, still, Americans understood their beliefs to be somewhat like their own. Finally, the Syrians worked hard at fitting in, both by learning English (if they weren’t already fluent when they arrived) and by seeking success on American terms. That a struggle went on for decades within the colony about whether and how to assimilate was mostly kept hidden from outsiders.

The case of Selma Abd-el-Nour shows that when faced with a sensational story, however, reporters used orientalist (and sexist) stereotypes with glee. Selma Gobreen and her sister Hannah Mallouf traveled together to the United States in 1886, leaving Hannah’s husband and two little children (one a newborn) behind. The sisters, Greek Catholics from Zahleh, had been educated by the British in Syria and were fluent in English, so they immediately began preaching and selling goods at churches and halls in Boston and New York. Like all of the Syrian entertainer/lecturers (read more about these entertainers here), they called themselves “missionaries,” claimed they were raising money to do good works in Syria, and told people they were recent converts. When Henry Jessup, an American missionary in Syria, heard about this, he wrote a letter to a colleague in New York fulminating against them, insisting they were raising money under false pretenses, since none of the money they raised would ever return to Syria for the good work they claimed to be doing. He was enraged that they were pretending to be Protestants (and had found work with the Presbyterian Mission in New York), when in truth they were unreconstructed Greek Catholics. Worst of all, he said, they had left Syria with “disreputable” men and had been “thoroughly” repudiated by their families.

From then on, their lives got very interesting. Hannah’s husband and children (ages 4 and 1½) arrived in 1888; the reunited family traveled to the west coast (so much for being “repudiated” by her family), ostensibly looking for a climate conducive to Habeeb’s health but probably also selling oriental goods. By 1892 Habeeb and Hannah were no longer living together, and Hannah raised her two sons on her own. Winter and summer, she traveled from one exclusive resort to the next (with her children in tow), selling oriental goods and laces to the guests of the hotels. She seemed to be be able to straddle the worlds of socialite and saleswoman and did quite well for herself. She sent both her sons to private school in New York–the only Syrians of their generation so privileged–and her older son became a champion golfer, going on to play for Cornell University (he was nicknamed “the Cornell crack”). 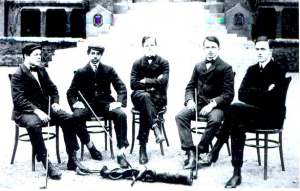 After three years of preaching, lecturing and serving as an interpreter for the Presbyterian Mission, Selma married John Abd-el-Nour in Boston in 1889. He was one of the earliest immigrants, having arrived in 1880. They  traveled first class on a long European honeymoon. When they returned, they returned to New York, and occupied a series of luxurious apartments at some distance from the Syrian colony. These apartments were decorated in high Victorian orientalist taste, with textiles, rugs, furniture and bibelots from the Middle East covering every surface. In 1899, they moved to a six-acre “country retreat” on Staten Island, for which they paid $9,000. Interestingly, Selma was named as sole purchaser. The interior of their home was pictured in a 1902 New-York Tribune article with the caption, “The Syrian as a Capitalist.”

Although no newspaper would credit it, it seems that at least some of this wealth was Selma’s. It’s true that John was very successful before they met and married, but it is also true that Selma seemed to be working on her own account even after she married. She was arrested in 1890, 1893 and 1894 (and perhaps other times as well) for smuggling oriental goods across the Canadian border to avoid paying customs duties. The 1894 arrest made the front page of 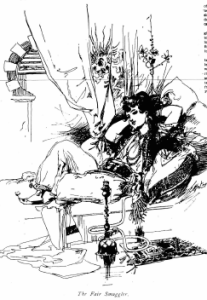 Selma “The Fair Smuggler” in a sketch in the National Police Gazette, 1894.

newspapers all over the country with headlines like “Selma the Syrian Siren.” A full page feature in the National Police Gazette (known for its semi-salacious stories aimed at its largely male readership) included a sketch of Selma as an oriental odalisque reclining on a divan dressed in harem pants, shod in turned up slippers, and smoking a water pipe (right). She was held on $6,000 bail, an extraordinary amount for the time.

The newspapers alternated between delight in the fact that a woman was the “brains” behind the smuggling enterprise and speculation that she was under the influence of her powerful husband and being punished for his misdeeds. The Police Gazette seemed to hold the latter view as did a sympathetic writer who happened to be a woman. Her three arrests (he was never charged) and the arrest of her six accomplices suggest, however, that she was working for herself and had an entrepreneurial flair (see my blog of July 27, 2015, for other examples of married women working for themselves).

Despite the arrests and the costs to keep herself out of jail  (bail, lawyer’s fees, and customs duties and penalties), she seems to have been quite prosperous. When in 1905, the Abd-el-Nour marriage blew up–there were murder threats, an attempted kidnapping, and fistfights between her brothers and Abd-el-Nour–she and her son moved out of the Staten Island house to the luxurious Murray Hill Hotel in Manhattan, and she paid for her sister and brothers to join her there. She filed for divorce on the grounds of adultery (she named the wife of Abd-el-Nour’s partner as co-respondent), but it’s not clear if the divorce actually took place, because they are listed together in the 1910 census, still in Staten Island (although it is possible that Abd-el-Nour lied to the census-taker about her presence). 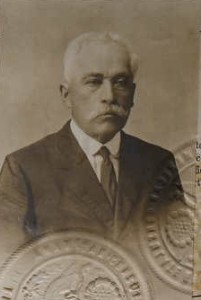 John began trading in the Far East, making many trips to China, Japan, and the Philippines; he lived in Tientsin, China for several years, exporting embroidered goods and textiles. It is not clear whether he was self-employed or working for others. During those years, he moved his residence to California, while Selma and their son Hector remained in New York. Did he support them even though they lived far apart? We don’t know, but if not, she either had saved enough money to live on and raise her son or was forced to go back to work. Selma and Hector both ended up in California–perhaps the family reunited there–and Selma died in Kern County, California in 1924. She is buried in an unmarked grave in Lancaster, California.

John and Hector then settled in rural San Diego, where John partnered with an American investor to set up a large-scale silkworm farm and a silk production facility. He died before he could put it into effect. Hector never married and died in San Diego sixteen years after his father.

“Selma the Syrian Siren” was vilified for breaking the law, yes, but more importantly, she broke out of the traditional role that most Victorian, not to mention “oriental,” women were expected to play, and she was punished for it in the press. One hopes the money she earned armored her against those insults.