The Strange Journey of the Syrian Ibrahim G. Kheiralla: The First Baha’i Missionary to the United States (Part 2)

The friends eventually went their separate ways. In early 1894, Haddad went to Europe to participate in the Antwerp fair and then returned to Syria, while Kheiralla decided to settle down in Chicago and become a “spiritual healer” as a way to make a living. His healing method combined laying on of hands, medicinal herbs smoked through a water pipe, and the recitation of Bible passages; he charged two dollars a session. To bolster his reputation, he purchased a degree from a diploma mill in Chicago; he was henceforth referred to as “Dr. Ibrahim Kheiralla” and called himself a physician. 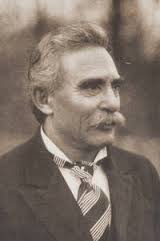 At the same time, he began to teach classes with an aim to introducing Americans to Baha’ism. He devised a curriculum that combined spiritualism with essentials of Baha’ism, at least as Kheiralla conceived them, relating the faith to Christian teachings and Bible passages and minimizing its origins in Shi’ism and Islam.[1] Not everyone who graduated from his classes was “given the Great Name,” i.e. became Baha’i, and Kheiralla decided who did and who did not “pass.” Outsiders were not allowed to know the tenets of the religion or the content of the classes, and because the process was shrouded in secrecy, it was considered a cult by most Americans. By 1899, however, Kheiralla began to see the value in publicity and talked in public for the first time about his teaching. In an interview in the New York World, he said, “We fully believe in our great master, Jesus, the Christ, and all his teachings….” thus helping to alleviate the anxiety felt by many about a “Moslem” proselyting in America. His limited knowledge of Baha’u’llah’s teachings as well as his efforts to make the faith acceptable to Americans heavily influenced Baha’ism in this country and elsewhere in the west.[2]

When he decided to stay in the United States, he directed Mary to come from Egypt with the children, but she evidently refused, so he divorced her and brought his children to be with him. He married his fourth wife, Marian Miller, in Chicago in 1895; she was one of his earliest converts. She is credited with strongly influencing the content of his lectures and classes, as well as imposing order on the chaos of his frenetic schedule.

His success in converting Americans was modest, although the numbers grew steadily in the first few years. Several hysterical articles about this secret sect estimated his followers at 80,000 and claimed that the majority were women under Kheiralla’s spell. It would be understandable if this latter were true, because he was clearly a striking presence and undoubtedly charismatic. In fact, the numbers of early converts seem to have been about equally divided between men and women.[3]

His most important convert was probably Phoebe Hearst, the widow of Senator George Hearst and mother of William Randolph Hearst. She paid the expenses of Kheiralla, Miller, two Chicago converts (Lua and George Getzinger), Robert Turner (Hearst’s butler and the first African American convert), and herself to visit Abdu’l-Baha in Akka in 1898-99.[4] Although the meetings were apparently convivial, it was at this time that Kheiralla began to withdraw his support from Abdu’l-Baha as the leader of the faith. It’s not clear why he did so, although there seems to have been a rivalry brewing between Kheiralla and Getzinger, which Abdu’l-Baha did nothing to ameliorate. 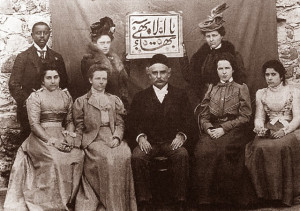 Ibrahaim Kheiralla in Akka, Palestine, with some of his American followers, 1899.

When he returned to the United States, Kheiralla was asked to sign an oath of loyalty to Abdu’l-Baha, which he refused to do. His disaffection eventually led to a schism in the American Baha’i movement, with most of the converts keeping faith with Abdu’l-Baha and others following Kheiralla (who had thrown his loyalty behind the excommunicated step-brother of Abdu’l-Baha). His remaining followers in Chicago and Kenosha, Wisconsin, became the “Society of Behaists” and they founded the “Central Church of the Manifestation” in 1900. The rest of the Baha’is turned against him, including his old friend Anton Haddad.

His wife Marian too decided to follow Abdu’l-Baha, and she filed for divorce on the grounds that Kheiralla was a bigamist. When it was proved he had legally divorced his former wife in Chicago, Kheiralla turned the tables and sued Miller for divorce. It was granted, allowing him to marry a fifth time, to another convert in 1904. She died in 1912.

His two daughters, both Baha’is, married Syrian Christians; one went to live in Beirut. His son, who had converted to Baha’ism when he arrived from Egypt in 1896, went into the import-export business and in 1906 brought in his father as a partner; this business supported Ibrahim for the rest of his life, which was lucky because it seemed that his healing and his preaching could no longer provide sufficient income. Ibrahim was on a ship en route to visit his daughter in Beirut in 1923 when the boiler exploded and burned him badly; he died in Beirut from his injuries. His son George, ironically, re-converted to Christianity after Ibrahim’s death, and then converted once again, this time to Islam, and became a spokesman for the Arab League.

Many people accused Kheiralla of being a charlatan, an opportunist, a grandstander, and a womanizer. His beliefs were “nothing but a patchwork of absurdities,” said one critic. There was some truth in these accusations, and no one has really made an attempt to determine whether what he taught reflected what he actually believed. But he was the first to bring Baha’ism to the United States, laying the foundation for the entire movement. He ended up on the losing side of the schism that he fomented, which left him marginalized with a dwindling following, but the Baha’i movement in the United States continued to grow, separate from him. Conversions and recent immigrants from countries like Iran have strengthened its numbers in the U.S. to something like 150,000, with more than 5,000,000 adherents around the world.

[1] As Richard Hollinger notes, the curriculum was significantly influenced by the “metaphysical subculture” of Chicago, to which most of his students belonged. Richard Hollinger, “’Wonderful True Visions’: Magic, Mysticism and Millennialism in the Making of the American Baha’i Community, 1892-1895,” in John Danesh and Seen Fazel, Eds., Search for Values: Ethics in Baha’i Thought (Los Angeles, 2004-5), 207.

[2] As mentioned in note 1, Hollinger minimizes his influence.

[4] Those who went called it a “pilgrimage.”

Read more about America’s first Arab immigrants in Strangers in the West.